One of the main weaknesses of LED technology is its sensitivity to transitory overvoltages, whether generated by maneuvers on the power grid or atmospheric or electrostatic discharges. This fragility has meant a reduction in the lifespan of this light source and a considerable outlay in maintenance. The ATP's LED street lights, however, are immune to overvoltages because of their unique features and special architecture. On the one hand, they all are Class II and therefore do not need grounding, which is the main way of entry of atmospheric discharges. Also, their outer structure is made with the exclusive technical polymers S7 and T5, instead of metal, eliminating the possibility of electrostatic discharges. This combination of factors makes the ATP LED street lights the most robust on the market. It is essential to bear in mind that the inconveniences caused by transitory overvoltages are a new circumstance that was not even taken into consideration before the LED was massively implanted since the magnetic ballasts that are installed with the discharge lamps are not vulnerable to this type of surges. That is why today it is pertinent to review the origin of overvoltages as well as their consequences and think about effective solutions. 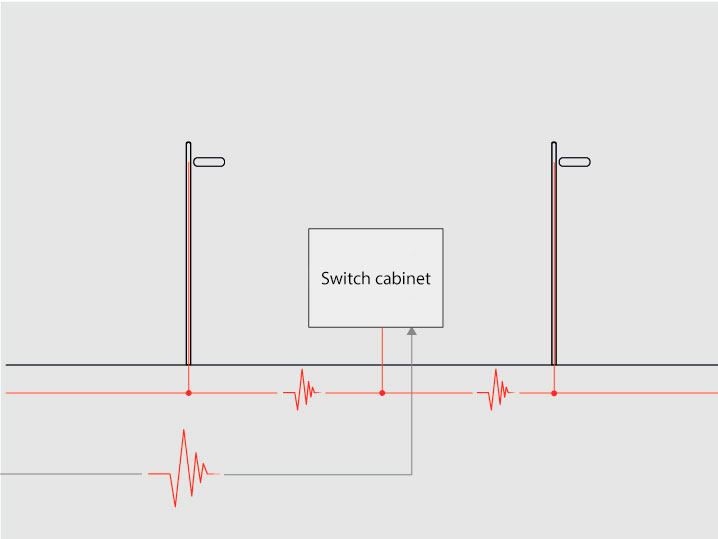 Maneuvers on the power grid: They are the least dangerous for LED luminaires, and are produced when carrying out maneuvers on the electricity grid such as low voltage grid switching due to turning on or off electric motors. Others are caused by the coexistence of street lights with conventional technology (magnetic ballasts) with LED luminaires in the same line. Such disturbances are pulses of several kV and can cause premature aging of the drivers and even, if they do not stabilize the current well, get to affect the LED itself. The solution to this problem is relatively simple and inexpensive: to avoid deterioration it is sufficient to integrate an electronic equipment that has a built-in protection between line and neutral (differential mode) of about 6 kV. 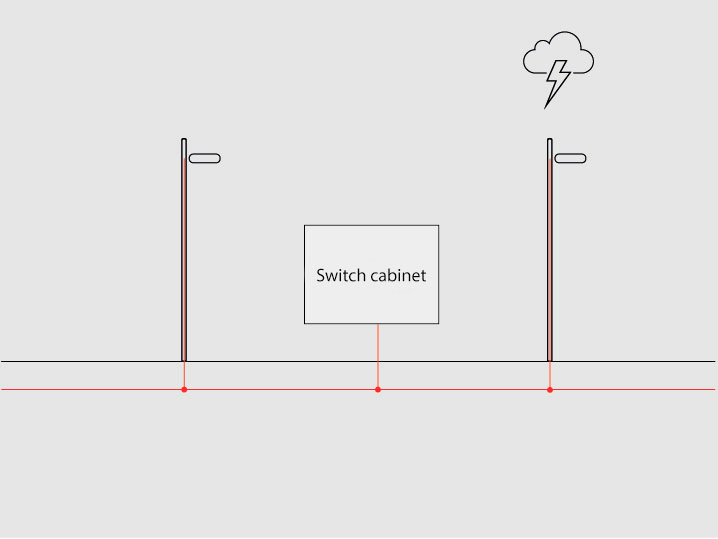 Atmospheric discharges: Overvoltages caused by atmospheric discharges are the most dangerous for LED installations since they cause voltage peaks of several tens of kV. It should be noted that the direct fall of a lightning bolt in a luminaire destroys it completely, and there is no protection system that can avoid it. The protections in LED luminaires are, therefore, to mitigate the indirect effects of the fall of these bolts of lightning, and are installed in the pole of the ensemble or in the luminaire. These surges tend to propagate through the grounding –as they seek the path with less impedance–; that's why they affect Class I luminaries more intensely than Class II. The consequences include the destruction of the driver and, occasionally, the failure of the LED. These threats can be solved by installing equipment with integrated protections; in this case, said protections must be dimensioned to resist this type of overvoltages. 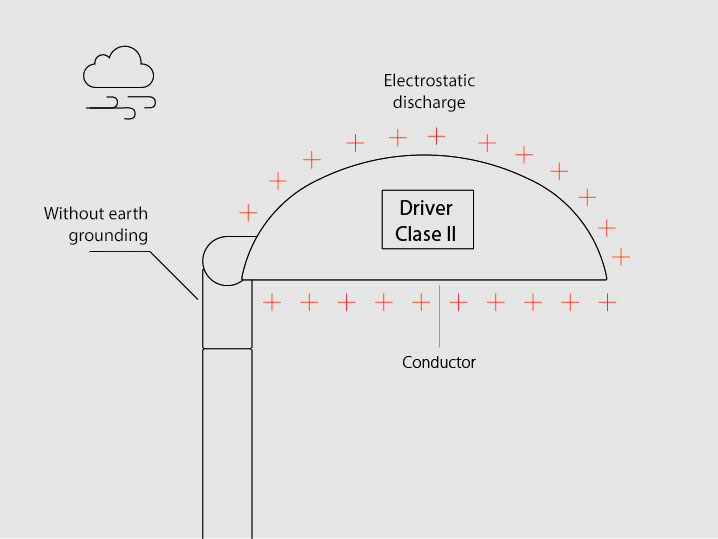 Electrostatic discharges (ESD): An ESD is the transfer of an electric charge caused by the friction of the metal housing by wind and particles, due to a potential difference. It is important to know that ESD can reach values of tens of thousands of volts. Bearing in mind that both certain elements of the driver and the transmitters resist only 100 V of voltage and that the power LEDs that are usually seen in public lighting luminaires hold around 5000 V, it is easy to see the danger posed by ESD for the lighting of light-emitting diodes.It is therefore imperative to take into account ESD phenomena both in the production process and in the installation and operation of the luminaires. These discharges are more or less pronounced depending on external agents such as relative humidity, temperature and the level of ionization of the air, and others inherent to the design of the luminaire, such as vibrations associated with the type of packaging and wind, or the geometry and material of the product. ATP ensembles, being manufactured entirely with technopolymers, do not suffer from this type of surges.

Copyright © 2016 ATP Lighting Inc. All rights reserved. ATP Lighting, the ATP Lighting logo and all trade names listed on this website with the ® symbol are registered trademarks of ATP Lighting.

Specially designed to satisfy the highest demands of resistance to external agents and to vandalism in public lighting and urban furniture.

Our lighting and outside furniture products are completely rust-proof since they are made out of raw materials which are invulnerable to corrosion.

Our products are completely safe since they are made with insulating materials which do not conduct electricity and prevent any danger of electrocution when making contact with the column or the luminaire.

Vandal-proof street lighting and urban furniture capable of withstanding and passing impact tests beyond 50 joules, which is more than twice the standard of IK Rating EN 50102.

Several devices ensure the sealing of the luminaire in any situation.

This high IP rate offers whole protection to all the internal elements of the street light.

Products made with 100 % recyclable, sustainable and ecologic materials.

Get to know the most ecological street lighting of the world.

The highest warranty in the sector.